With the countdown to Miss Oklahoma almost over, I want to share a story of appreciation. I began photographing local and state level youth pageants back in 2010. After about three years of changes, I began to see the consistent results I wanted every time out. In 2014, I looked into transitioning to the miss and teen pageant arena, especially covering Miss Oklahoma events. Even with my knowledge and years of experience, I still doubted my abilities to properly photograph these events. That all changed after I attended the Wonderland Anniversary party for Liberte on June 11, 2014. I arrived at the party and noticed a young lady wearing a crown with people crowding around her. I found out that the young lady was Alex Eppler, who had been crowned Miss Oklahoma 2014 only four days prior. I strayed away from the crowd and floated around the store for a while only to have Alex come right over and speak to me. In our five minute conversation, I told Alex about my pageant coverage experience and my doubts about transitioning to miss-teen pageants. She assured me that I could do it. Those words of wisdom became the unexpected support that I needed to expand my work as a pageant photographer. Thanks Alex for the support, and I know that you'll excel in your future endeavors.

Liberte Anniversary GroupI photobombed the image instead of participating with the group. Photo by Shevaun Williams and Associates via Facebook. 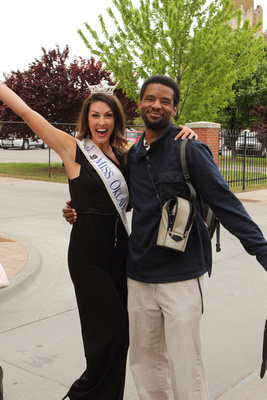 Alex and IAlex and I after volunteering with the American Red Cross at the 20th Anniversary of the Oklahoma City bombing.